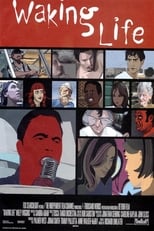 Release: Jan. 23rd, 2001
Runtime: 1 hour, 39 minutes
Waking Life is about a young man in a persistent lucid dream-like state. The film follows its protagonist as he initially observes and later participates in philosophical discussions that weave together issues like reality, free will, our relationships with others, and the meaning of life.

We didn't find any linked discussions for this film. Here are the results of a quick search of possibly related threads:
3 Waking Life
I've seen this movie twice already, and I plan on seeing it at least 2 more times. It's officially one of my all time favorites - I've never seen a movie like Waking Life before. It's so thoughtful, s...
7 Can you suggest some movies like "Waking Life"?
im looking for some movies like the movie Waking Life, im looking for films that make you think like this movie and donnie darko,a scanner darkly,Enter the Void, also im looking for films that hav...
0 Waking Up In Reno
i searched for this (seeing as in australia we always see movies after y'all) but couldn't find another thread on this one Waking up in Reno....i completely loved it...a quircky [sp?] movie about 2...
3 Looking for a movie about waking from a coma
OK bare with me. This may or not be a movie. If it's not, I may write a (bad) screenplay. The basic premis is: a man has wonderfully magical mystical things happen to him over the course of an hour a...
2 Waking the dead ritual?
I need help on the title of this film I've seen on HBO a few years ago. I think it's a horror movie. I vaguely remember some scenes. All I know is that it's about some kind of circle formed with stone...

Daniel M I remember last year when I was in my university accommodation I had this really long lucid dream, it was more like a nightmare, I kept peeling back the layers and trying to get out but I couldn't, and as I kept trying I had to keep reminding myself I was in a dream as you would fall back and forget....
READ REVIEW

gohansrage The pace was terrible. The voices were ho hum. The animation took away from the information, which itself was boring and dated..
READ REVIEW

Ezikiel Never before have I been so interested in an animated film the way I was with [i]Waking Life[/i]..
READ REVIEW
View All (4)