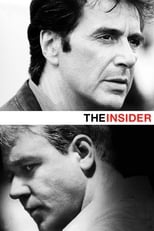 Release: Mar. 10th, 1999
Runtime: 2 hours, 37 minutes
Tells the true story of a 60 Minutes television series exposé of the tobacco industry, as seen through the eyes of a real tobacco executive, Jeffrey Wigand.

8 The Insider
Does anyone know where I can read up on the filming techniques and actual mediums of film that were used in this beauty of a film? I absolutely love the tones and colors in every scene...it fits the w...

Iroquois Michael Mann's career has always come across as a director whose work tends to be classified rather easily as "genre fare", most frequently involving dramas and thrillers that could be filed under the crime sub-genre.
READ REVIEW

Gideon58 Bergman wants Wigand to do an interview with Mike Wallace (Christopher Plummer) but legally, Wigand can't do that until he goes to court regarding what Big Tobacco is doing and his actions at this point are beginning to methodically destroy Wigand's life.
READ REVIEW