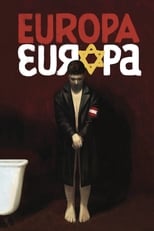 Release: Nov. 14th, 1990
Runtime: 1 hour, 52 minutes
A Jewish boy separated from his family in the early days of WWII poses as a German orphan and is taken into the heart of the Nazi world as a 'war hero' and eventually becomes a Hitler Youth. Although improbabilities and happenstance are cornerstones of the film, it is based upon a true story.

0 Europa Report: Warning Spoiler Alert
I wasted one and a half hours ,watching this movie ,to find out that an Octopus lives in the Ocean on Europa !...

Citizen Rules A lot of ironic/funny stuff like: the seduction by the big German woman on the train, who's yelling 'my Fuhrer, my Fuhrer'...and the scene where he surrendered to the Polish army, only to 'capture' them and become a hero to the German army, ha...I mean man.
READ REVIEW