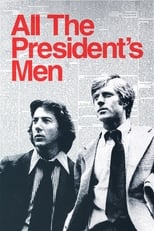 Release: Apr. 4th, 1976
Runtime: 2 hours, 18 minutes
In the run-up to the 1972 elections, Washington Post reporter Bob Woodward covers what seems to be a minor break-in at the Democratic Party National Headquarters. He is surprised to find top lawyers already on the defense case, and the discovery of names and addresses of Republican fund organizers on the accused further arouses his suspicions. After the editor of the Post runs with the story and assigns Woodward and Carl Bernstein to it, they...

Iroquois It's not often where you think of a film as a screenwriter's film (excepting the many instances where the director is also the screenwriter, of course) but when I think of such a well-regarded screenwriter my first thought is William Goldman.
READ REVIEW

JayDee And if you want two more indications that show just how much I appreciated the film, afterwards I went and further investigated the case, checking to see how long their investigation took and what Bernstein and Woodward did afterwards.
READ REVIEW
View All (4)