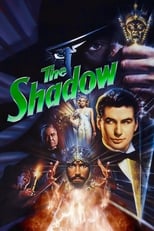 Release: Jul. 1st, 1994
Runtime: 1 hour, 48 minutes
Based on the 1930's comic strip, puts the hero up against his arch enemy, Shiwan Khan, who plans to take over the world by holding a city to ransom using an atom bomb. Using his powers of invisibility and "The power to cloud men's minds", the Shadow comes blazing to the city's rescue with explosive results.

1 Red Shadow
Has anyone seen "Red Shadow" (also known as Akakage)? I found it absolutely hilarious though I'm pretty sure it was meant to be an action film. It's like a japanese version of "undercov...
6 Shadow of the Vampire?
I was wondering if someone saw Shadow of the Vampire? It looks so good, I can't wait to see it...looks creepy. Cheers!...
1 Have you seen Inside The Shadow?
This post is intended for people who love watching documentaries. I have seen an interesting video of Dorian Yates and I have to say that I'm amazed at the transformation he made since day 1 up to the...
5 What's the name of this shadow movie?
I saw this trailer a little while ago. The plot as far as I can remember is this groups set of people have to stay in the light or this thing will get them. This 'thing' also creates false lighted are...
2 Shadow Magic
I wanna see this movie but I don't have a vcr!...