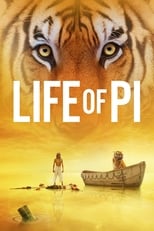 Release: Nov. 20th, 2012
Runtime: 2 hours, 7 minutes
The story of an Indian boy named Pi, a zookeeper's son who finds himself in the company of a hyena, zebra, orangutan, and a Bengal tiger after a shipwreck sets them adrift in the Pacific Ocean.

MovieMeditation Because I do think the film is absolutely stunning, and it is the visuals, which make the movie lift off the screen, while the main character and authentic artificial animals award the movie with all the weight.
READ REVIEW

Fabulous While this is definitely the case for most movies, it wasn't for this one.
READ REVIEW

bluedeed Lee almost had it, and the film is still good, and one of the best shot films of the year, but he falters too much for the film to be great.
READ REVIEW