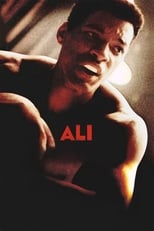 Release: Dec. 11th, 2001
Runtime: 2 hours, 37 minutes
In 1964, a brash, new pro boxer, fresh from his Olympic gold medal victory, explodes onto the scene: Cassius Clay. Bold and outspoken, he cuts an entirely new image for African Americans in sport with his proud public self-confidence and his unapologetic belief that he is the greatest boxer of all time. Yet at the top of his game, both Ali's personal and professional lives face the ultimate test.

Darth Stujitzu I'm a huge fan of Ali as well, I own several documentaries including the excellent " When we were Kings ", perhaps the thought of Smith playing the iconic Ali just didn't do it for me, who would I have chosen, I honestly don't know.
READ REVIEW