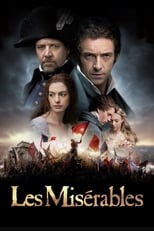 We didn't find any linked discussions for this film. Here are the results of a quick search of possibly related threads:
28 Les Miserables
Cast: Anne Hathaway - Good sort Hugh Jackman - Aussie Russell Crowe - Aussie ...
3 Les Miserables (my first review, hence possible mistakes)
I was quite excited and looking forward to watching Les Miserables as i was quite familiar with the story, the book and everything. Although i knew it was going to be a musical, i didn't know that it ...

JayDee In a film encompassing so many characters and taking place over a couple of decades he is the one constant the film has to offer, the character who most carries the film.
READ REVIEW

DalekbusterScreen5 This is the first time a musical has been filmed with live singing and it helps with an emotional film like Les Miserables to allow the singing to feel raw rather than manufactured.
READ REVIEW