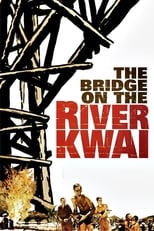 Release: Oct. 2nd, 1957
Runtime: 2 hours, 41 minutes
The classic story of English POWs in Burma forced to build a bridge to aid the war effort of their Japanese captors. British and American intelligence officers conspire to blow up the structure, but Col. Nicholson , the commander who supervised the bridge's construction, has acquired a sense of pride in his creation and tries to foil their plans.

We didn't find any linked discussions for this film. Here are the results of a quick search of possibly related threads:
2 The Bridge on the River Kwai (1957)
I started watching 'The Bridge on the River Kwai' at around 11 pm last night (the third film of that night). I had initially thought to only watch the first hour and finish it the next morning, this h...
8 Mystic River
Starring: Sean Penn, Kevin Bacon, Tim Robbins, Laurence Fishbourne, and Laura Linney The movie is directed by Clint Eastwood. It's about a guy who's daughter is found murdered, and an investigatio...
0 Frozen River:
Recently, I saw the film, Frozen River, at the Coolidge Corner Theatre, just outside Boston. Frozen River is about a white working-class woman with two young sons, who has been saving up for a ne...
39 Mystic River
This film is amazing. Breathtaking in every way, and every aspect. Penn deserves an Oscar. This was his best performance, and if the Academy doesn't reward him, then I've lost every shread o...
0 Frozen River
CAST: Melissa Leo Misty Upham Michael O'Keefe Charlie McDermott James Reilly Dylan Carusona Jay Klaitz John Canoe Nancy Wu Rajesh Bose Joey Chanlin Betty Ouyang Gargi Shinde PLOT: Takes place in the...

JayDee A tremendous film and an amazing accomplishment by Lean. With great direction, writing and acting I can certainly see why it rates as one of the all time great war films..
READ REVIEW

Takoma11 The film centers the humanity of the story through the use of several observer type characters: a doctor (James Donald) who cares for the sick and injured at the POW camp and an unnamed group of women who accompany the Allied soldiers on their mission.
READ REVIEW

meatwadsprite This movie is enormous in every way , each shot in the movie captures huge environments and massive amounts of actors with each a job to do..
READ REVIEW
View All (4)