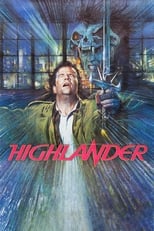 Release: Mar. 7th, 1986
Runtime: 1 hour, 56 minutes
He fought his first battle on the Scottish Highlands in 1536. He will fight his greatest battle on the streets of New York City in 1986. His name is Connor MacLeod. He is immortal.

The Rodent Before the Kurgan is able to decapitate Connor, he is overthrown by Connor's Kinsmen and after a number of hours, Connor rises from the grave, seemingly unharmed.
READ REVIEW

The Gnat Overall this is a cult classic film, if you go into it expecting it to be more, you will be disappointed, and for some it might not be the greatest cult classic film out there, but for those who appreciate that sort of film, they should enjoy it.
READ REVIEW