The Oscars are early this year! Don't forget to make your picks.
← Back to Movies

The Gunfight at Dodge City 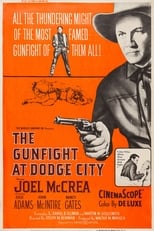 Release: May 1st, 1959
Runtime: 1 hour, 21 minutes
Fleeing to Dodge City after killing a man in self defence Masterson finds his brother Ed (Harry Lauter) running for sheriff of the town. When Ed is killed by hired guns of the corrupt incumbent Bat is determined to settle the score with violence but he is convinced by the townspeople that the best way to avenge his brother's death is by taking Ed's place on the ballot. Bat agrees and wins the election but his new role on the right side of the...