Related: The Monty Python and the Holy Grail Quiz 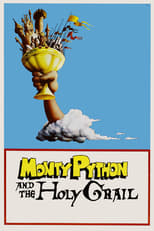 Release: May 25th, 1975
Runtime: 1 hour, 31 minutes
King Arthur, accompanied by his squire, recruits his Knights of the Round Table, including Sir Bedevere the Wise, Sir Lancelot the Brave, Sir Robin the Not-Quite-So-Brave-As-Sir-Lancelot and Sir Galahad the Pure. On the way, Arthur battles the Black Knight who, despite having had all his limbs chopped off, insists he can still fight. They reach Camelot, but Arthur decides not to enter, as "it is a silly place".

We didn't find any linked discussions for this film. Here are the results of a quick search of possibly related threads:
1 Monty Python and the Holy Grail SE
This is a must own DVD. I got this today and have been rolling with the features that are on it for a while now. Lemme list some of the features on this 2 disc extravaganza. I'm copying this exac...
23 Monty Python & The Holy Grail
Absolutely terrific. Funny, silly and very enjoyable. From the killer rabbit to the knights who say "ni". This movie is on my top list on high enjoyment and non-stop laughter. Who else has s...
12 If anyone can answer this, it's my Holy Grail
I'm thinking the time frame would of been around 1985 to 1988. However, it could of been before because I'm not sure if it was a movie that had been out for a while when I viewed it, as I was a kid. A...
6 SNL vs. Monty Python
Not necessarily JUST the shows but also the movies made by the members of each cast. Let's keep it to more or less the original SNL cast from the 70s. So like: Blues Bros. Caddy Shack National Lampo...
19 What are your thoughts on Monty Python?
MONTY PYTHON!? I love this series of movies....the british humor is kind of hard to get at first but after a little bit its awsome...in the entire series they only had one women on it...the rest of th...

Gatsby I consider Monty Python and the Holy Grail to be a comedic masterpiece, no actually; more like a bible.
READ REVIEW

Jack1 During one of the first screenings of the film in front of a live audience, director Terry Jones noticed that when music was played during the jokes, there was a marked reduction of laughter from the audience.
READ REVIEW

Omnizoa As I explained in my review of Monty Python's previous movie, the whole "British Humor" argument doesn't make any ******* sense, ESPECIALLY when this movie is set IN MEDIEVAL BRITAIN.
READ REVIEW