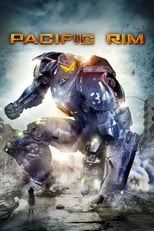 Release: Jul. 11th, 2013
Runtime: 2 hours, 11 minutes
When legions of monstrous creatures, known as Kaiju, started rising from the sea, a war began that would take millions of lives and consume humanity's resources for years on end. To combat the giant Kaiju, a special type of weapon was devised: massive robots, called Jaegers, which are controlled simultaneously by two pilots whose minds are locked in a neural bridge. But even the Jaegers are proving nearly defenseless in the face of the...

10 Pacific Rim
I'm usually a massive fan of Guillermo del Toro and his films and he has directed this one, but I'm very disappointed with the trailer, looks nothing special at all. I'm hoping it's a case of bad t...
21 Pacific Rim
Overall, a very decent flick. Definitely worth the 10 or so dollars you'd spend seeing it in the theaters, or better yet, in IMAX. The action was great, but the character development could've gone a l...
0 Pacific Rim
So were these aliens, machines or alive ? Did one of the Aliens in the movie not give birth , so does that mean they were alive , which makes no sense at all , just as the whole movie made no sense ? ...
6 Pacific Rim
I have a passion for Godzilla and the movies, so a friend suggested I watch Pacific Rim. IS this movie like Godzilla and if so in what aspects? I have yet to see it....
16 Pacific Rim 2
Yep... it's coming... sources (Variety, The Verge, IGN, Slashfilm and many others) suggest April 7th 2017 after the animated series and follow-up comics are done with....

The Gunslinger45 So far this movie is the most fun I have had at the movies so far, and so far is the best movie of the summer.
READ REVIEW

seanc What little credit I am giving to the movie is because Del Toro can create some cool looking robots and monsters.
READ REVIEW