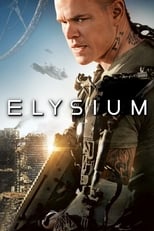 Release: Aug. 7th, 2013
Runtime: 1 hour, 49 minutes
In the year 2159, two classes of people exist: the very wealthy who live on a pristine man-made space station called Elysium, and the rest, who live on an overpopulated, ruined Earth. Secretary Rhodes (Jodie Foster), a hard line government of?cial, will stop at nothing to enforce anti-immigration laws and preserve the luxurious lifestyle of the citizens of Elysium. That doesn’t stop the people of Earth from trying to get in, by any means they...

31 Elysium
New film coming from Neill Blomkamp, director of the wonderful District 9, another shot has been released of Matt Damon in this film: In the year 2159 two classes of people exist: the very wealth...

seanc However instead of conveying and exploring these themes in a meaningful way he just wants us to jump on board to his way of thinking and enjoy some visceral eye candy along the way.
READ REVIEW

Iroquois While District 9 at least managed to distinguish its own take of class warfare with its use of crustacean-like aliens and a body-horror plot for its bureaucratic human protoganist, Elysium somehow manages to take some of the most distinctive aspects of that particular film (South African setting, te....
READ REVIEW