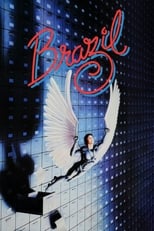 Release: Feb. 20th, 1985
Runtime: 2 hours, 23 minutes
Low-level bureaucrat Sam Lowry escapes the monotony of his day-to-day life through a recurring daydream of himself as a virtuous hero saving a beautiful damsel. Investigating a case that led to the wrongful arrest and eventual death of an innocent man instead of wanted terrorist Harry Tuttle, he meets the woman from his daydream, and in trying to help her gets caught in a web of mistaken identities, mindless bureaucracy and lies.

29 Brazil
I need opinions on this film folks. I personally only know two people that have seen it and one reckoned it was a bloated, over-the-top waste of time whilst the other said it was one of the best films...
44 Rate that Movie: Brazil
BRAZIL (Terry Gilliam, 1985) MoFo Rating: 7.9 (22 votes) ...
2 Hi guys , I'm new ... I'm Soph from Brazil can you help me with a movie?
Hi the movie I'm looking for ... I believe it's American.. Well I don't remember much of the plot. But there are two naughty boys, spending holidays with their families in the Caribbean. One of the...
9 Do you think the ending of Brazil was happy? (may contain spoilers)
I mean, on the one hand, the good guys lost. On the other hand, Sam's in living in a happy fantasy....
1 Good site to import Blu-Rays to Brazil.
Did you guys know any site that I can buy Blu-Rays that is safe? I Saw the Devil, The Wailing and even Oldboy wasn't released in Blu-Ray here and I really want to import but I don't know where to sta...

MovieMeditation After watching the film though, Im still stuck in a whirlwind of wonder, continuously curious about the film and its themes and take on a future society, left standing as a faintly frustrated individual not knowing whether to be annoyed or amazed by it all.
READ REVIEW

Iroquois The attention to detail is incredibly meticulous, and it's all captured with amazing aptitude by cinematographer Roger Pratt, whose camerawork also deserves a mention for capturing the weird world of Brazil in a manner as equally bizarre yet familiar.If anything really stands out to anybody watching....
READ REVIEW
View All (9)