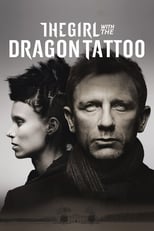 Release: Dec. 14th, 2011
Runtime: 2 hours, 38 minutes
This English-language adaptation of the Swedish novel by Stieg Larsson follows a disgraced journalist, Mikael Blomkvist, as he investigates the disappearance of a weary patriarch's niece from 40 years ago. He is aided by the pierced, tattooed, punk computer hacker named Lisbeth Salander. As they work together in the investigation, Blomkvist and Salander uncover immense corruption beyond anything they have ever imagined.

6 Can anyone tell me whats with all the Nazi stuff in Dragon tattoo
Why did the author go so hard on what Nazis in Sweden did in the book and the movie ? I mean the things these people did to the women were unspeakable bordering on fantasy and unrealistic. Is there an...

Iroquois Fincher's version of Dragon Tattoo has a lot of the usual visual grit and pallor that your typical Fincher film has, which definitely suits the grim nature of the story.
READ REVIEW

Takoma11 I mean, the villain of the film literally gets off on filming female bodies in distress, and the movie itself feels like it comes uncomfortably close to the same thing.
READ REVIEW

akatemple Craig did a good job of playing the character but his English accent killed the part, he could have at least tried and pulled off a Swedish accent, so I have to go with Michael Nyqvist as the better Mikael Blomkvist.
READ REVIEW