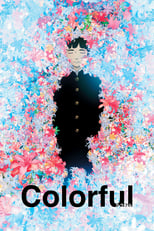 Release: Aug. 21st, 2010
Runtime: 2 hours, 7 minutes
Upon reaching the train station to death, a dejected soul is informed that he is lucky and will have another chance at life. He is placed in the body of a 14-year-old boy named Kobayashi Makoto, who has just committed suicide. Watched over by a neutral spirit named Purapura, the soul must figure out what his greatest sin and mistake in his former life was, before his time limit in Makoto's body runs out. He also has a number of other lesser...

Omnizoa We find out that his "selfish" brother suddenly decided to pursue a career in medicine immediately after Main Guy's suicide attempt, we find out Dad [insert some forgettable thing that redeems his honestly untarnished character], and we find out Mom was already grieving over her own mother's death when Main Guy's host body decided to take the Room Temperature Challenge.
READ REVIEW