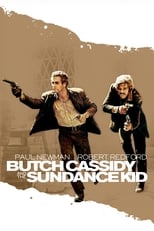 Release: Sep. 23rd, 1969
Runtime: 1 hour, 50 minutes
In late 1890s Wyoming, Butch Cassidy is the affable, clever and talkative leader of the outlaw Hole in the Wall Gang. His closest companion is the laconic dead-shot 'Sundance Kid'. As the west rapidly becomes civilized, the law finally catches up to Butch, Sundance and their gang. Chased doggedly by a special posse, the two decide to make their way to South America in hopes of evading their pursuers once and for all.

3 Butch Cassidy and Sundance Kid worldwide gross
I was just working out the worldwide cinema gross of my favourite movie,in the USA it did One hundred million,adjusted 800 million,I was just curious if the movie did the same abroad, about 100 millio...

Iroquois The entire opening sequence that introduces Butch and Sundance is shot entirely in sepia tones; though the film is in full colour for most of its running time, I would not have minded if the whole film had actually been captured in sepia.
READ REVIEW

Gideon58 Stylish and imaginative direction, a witty and intelligent screenplay, and the birth of a new screen pairing that provided off the charts chemistry are the primary selling points of a richly entertaining western called Butch Cassidy and the Sundance Kid that had me riveted to the screen from start t....
READ REVIEW
View All (6)