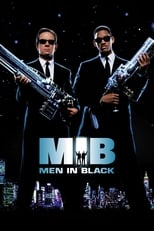 Release: Jul. 2nd, 1997
Runtime: 1 hour, 38 minutes
After a police chase with an otherworldly being, a New York City cop is recruited as an agent in a top-secret organization established to monitor and police alien activity on Earth: the Men in Black. Agent Kay and new recruit Agent Jay find themselves in the middle of a deadly plot by an intergalactic terrorist who has arrived on Earth to assassinate two ambassadors from opposing galaxies.

Ryder I haven't actually seen Contact, so I can't make a statement on the validity of that, but what I could claim is that the first Men in Black is indeed, in my humble opinion, one of the most underrated classics of the '90s - though I can't claim if it's the best of the trilogy, since I haven't seen th....
READ REVIEW

MovieMad16 There are some great effects in the film like The Alien ship crashing beginning and end , the 4 CGI aliens , The CGI Alien villian and The guns.
READ REVIEW