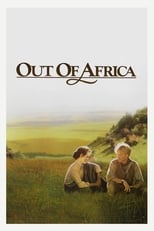 Release: Dec. 20th, 1985
Runtime: 2 hours, 41 minutes
Out of Africa tells the story of the life of Danish author Karen Blixen, who at the beginning of the 20th century moved to Africa to build a new life for herself. The film is based on the autobiographical novel by Karen Blixen from 1937.

We didn't find any linked discussions for this film. Here are the results of a quick search of possibly related threads:
4 Out of Africa (1985)
Out Of Africa This off beat film is based on the real life memoirs of a Danish woman called Karen Blixen ( played by Meryl Streep ) who lived in Kenya during the colonial times of British rule ...
3 WW-II movie map of Africa valet spy
This is for you old timers! I'm trying to find this B&W film about an (English?) spy in the German army camp in Africa (I think Northern part). I remember he is a valet to a General (?) and finds ...
8 How do i get the license to show movies in Africa
Hello members, I have a project that requires showing new movies in all the higher institutions of Nigeria. I need to know how i can get movie studio agents that can help to process this license. Plea...

mattiasflgrtll6 You're left wondering where destiny will take her, and if she ever will love again or rather stand alone in fear of being abandoned.
READ REVIEW

Iroquois Meryl Streep naturally brings a lot to this particular table as Baroness Karen Blixen, the source's author who ends up going to Africa with her new husband (Klaus Maria Brandauer, who makes for a surprisingly decent "antagonist" without descending into smarmy villainy).
READ REVIEW

ashdoc But things take a turn due to the appearance of a dashing handsome hunter---played by who else but Robert Redford....and Karen falls head over heels in love with him....they go for long hunts in the african grasslands where they participate in beautifully photographed hunting of lions and lionesses ....
READ REVIEW