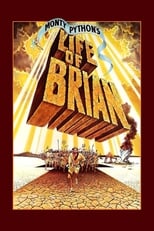 Release: Aug. 17th, 1979
Runtime: 1 hour, 34 minutes
Brian Cohen is an average young Jewish man, but through a series of ridiculous events, he gains a reputation as the Messiah. When he's not dodging his followers or being scolded by his shrill mother, the hapless Brian has to contend with the pompous Pontius Pilate and acronym-obsessed members of a separatist movement. Rife with Monty Python's signature absurdity, the tale finds Brian's life paralleling Biblical lore, albeit with many more laughs.

We didn't find any linked discussions for this film. Here are the results of a quick search of possibly related threads:
3 Monty Python's Meaning of Life ........Problems!!!
From dvdtalk.com Monty Python fans have yet another reason to fret. We've received numerous reports of problems with Universal Studios Home Video's DVD release for Monty Python's The Meaning of Li...
6 SNL vs. Monty Python
Not necessarily JUST the shows but also the movies made by the members of each cast. Let's keep it to more or less the original SNL cast from the 70s. So like: Blues Bros. Caddy Shack National Lampo...
19 What are your thoughts on Monty Python?
MONTY PYTHON!? I love this series of movies....the british humor is kind of hard to get at first but after a little bit its awsome...in the entire series they only had one women on it...the rest of th...
24 Monty Python Movies
It's time to pay homage to some of the Kings of Comedy...some people don't like British humor...so you all go away...the rest of us:It's tea time!My favorites,in order: -Monty Python and the Holy Gra...
1 Monty Python and the Holy Grail SE
This is a must own DVD. I got this today and have been rolling with the features that are on it for a while now. Lemme list some of the features on this 2 disc extravaganza. I'm copying this exac...

Citizen Rules The Monty Python comedy troupe travels back in time to intelligently spoof the life of a mistaken messiah, Brian.
READ REVIEW

Thief Set in 33 AD, Life of Brian follows the, well, life of Brian (Graham Chapman), a young, regular Jewish guy that is somehow mistaken for the Messiah.
READ REVIEW