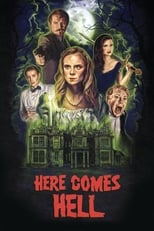 Release: Nov. 11th, 2019
Runtime: 1 hour, 20 minutes
The Old Dark House style mystery thriller gets an affectionately murky makeover in director Jack McHenry’s Agatha Christie-meets-Lucio Fulci feature debut. In stunning Black & White, with cut-glass British accents and a dodgy American in the cocktail party mix, a sophisticated 1930s soiree at an isolated country mansion descends into carnage, gore and demonic possession as rivalries and old friendships are put to the test when a gateway to Hell opens up.