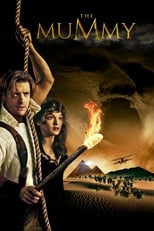 Release: Apr. 16th, 1999
Runtime: 2 hours, 4 minutes
Dashing legionnaire Rick O'Connell stumbles upon the hidden ruins of Hamunaptra while in the midst of a battle to claim the area in 1920s Egypt. It has been over three thousand years since former High Priest Imhotep suffered a fate worse than death as a punishment for a forbidden love—along with a curse that guarantees eternal doom upon the world if he is ever awoken.

We didn't find any linked discussions for this film. Here are the results of a quick search of possibly related threads:
2 Mummy movie where archeologic dig finds a mummy ressurects and turns out to be a ...
Movie where they do a dig find a mummy she gets resurrected and looks human but kills i cannot remember the title its an older movie possibly sern on horror channel at one point can any1 help?...

PeterVincent Thousands of years ago in Egypt a priest fell in love with the Pharaoh's mistress, so he killed the Pharaoh and the mistress killed herself so the priest could resurrect her after he escaped from the Pharoah's bodyguards.
READ REVIEW

MovieMad16 Omid Djalili, an actor i like in other TV or Film plays a sleazy jail owner and i actually wanted him to survive, but events in the film take a turn i wasn't a fan of.
READ REVIEW

aronisred I wont be surprised if DiCaprio was offered the role in once upon a time in Hollywood with the caveat of a golden globe nomination for his performance by default even before the a single shot of the movie was filmed.
READ REVIEW