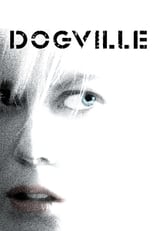 Release: May 19th, 2003
Runtime: 2 hours, 58 minutes
A barren soundstage is stylishly utilized to create a minimalist small-town setting in which a mysterious woman named Grace hides from the criminals who pursue her. The town is two-faced and offers to harbor Grace as long as she can make it worth their effort, so Grace works hard under the employ of various townspeople to win their favor. Tensions flare, however, and Grace's status as a helpless outsider provokes vicious contempt and abuse from...

We didn't find any linked discussions for this film. Here are the results of a quick search of possibly related threads:
86 Dogville (2003)
And the Audience Says Woof It seems to me that Lars von Trier has outdone himself with Dogville (2003). If you loved him before, you'll probably fawn over this picture. If you hated him...well,...

Gideon58 The story takes a little too long setting up what is happening here and, if the truth be known, the time used for exposition is necessary, but the rest of the story could have had a little more forward movement because the wait between the middle of the story and the powerhouse climax was just way t....
READ REVIEW