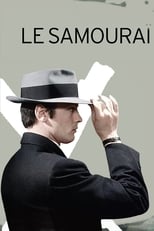 Release: Oct. 25th, 1967
Runtime: 1 hour, 45 minutes
In a career-defining performance, Alain Delon plays Jef Costello, a contract killer with samurai instincts. After carrying out a flawlessly planned hit, Jef finds himself caught between a persistent police investigator and a ruthless employer, and not even his armor of fedora and trench coat can protect him. An elegantly stylized masterpiece of cool by maverick director Jean?Pierre Melville, Le samouraď is a razor-sharp cocktail of 1940s...

MovieMeditation Together with my recent watch of The Third Man this scene joins the category for best chase scene I have ever seen; though the one in Le Samoura is hardly even a chase if you think of it, which is also one of the main reasons why I love and admire it so much.
READ REVIEW

Citizen Rules I read online that Le Samourai has influenced a lot of film makers and their movies.
READ REVIEW