A Wonderful Night in Split 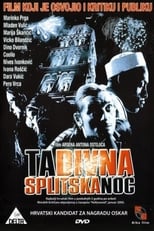 Release: Jul. 20th, 2004
Runtime: 1 hour, 40 minutes
The film is set over the course of a New Year's Eve night in the Croatian port city of Split, where it follows three parallel plots. The first plot line features a small-time drug dealer Nike (Marinko Prga) and a young widow Marija (Nives Ivankovic); the second plot line deals with a drug addict called Maja (Marija Skaricic) who decides to have sex with an US Navy sailor called Franky (Coolio) in exchange for some heroin; the third one shows a...

We didn't find any linked discussions for this film. Here are the results of a quick search of possibly related threads:
17 News on upcoming M. Night film (Don't click if you haven't seen Split)
I haven't seen Split yet and though I haven't read the full article, I read enough now to pretty much know the gist of the twist ending. Damn me and my curiosity. So, according to said article, Split ...
9 The Wonderful Future
I'm currently reading The Forever War by Joe Haldeman. I'm about 2/3s of the way through it and it paints a very depressing vision of the future. It got me thinking about the depiction of the future...
34 'It's A Wonderful Life' Sequel
I'm surprised no one has started a thread on this. Judging by the "unknown" director who is in charge of this project, this will be a disaster......
21 WWE Brand Split Draft!
Seth Rollins Charlotte Finn Balor Roman Reigns Brock Lesnar The New Day Sami Zayn Sasha Banks Chris Jericho Rusev and Lana Kevin Owens Enzo and Cass Gallows and A...
5 The wonderful world of sports films pt. 3
Sorta had to continue the franchise after seeing Rudy tonight. Well, this one's about football...and football. No, not twice the same, rather about the thing we folks call "american football&q...