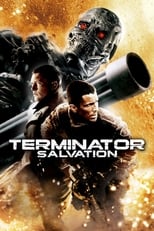 Release: May 20th, 2009
Runtime: 1 hour, 55 minutes
All grown up in post-apocalyptic 2018, John Connor must lead the resistance of humans against the increasingly dominating militaristic robots. But when Marcus Wright appears, his existence confuses the mission as Connor tries to determine whether Wright has come from the future or the past -- and whether he's friend or foe.

MovieMan8877445 This was such a great movie to see in theaters, though, because the action is extremely well done.
READ REVIEW

TheDOMINATOR The name Terminator is synonymous with words like explosion, action, and cyborgs. Terminator Salvation has it all, and it's all top-notch; the movie contains battles with Terminators both human-sized and immense, stimulating vehicular chases, and all-out war scenes of epic proportions.
READ REVIEW

TheUsualSuspect Terminator Salvation is better then Rise of the Machines and weaker then the first two.
READ REVIEW
View All (7)