Wallace and Gromit: The Wrong Trousers 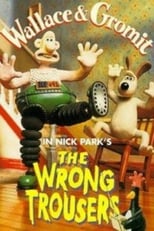 Release: Dec. 17th, 1993
Runtime: 30 minutes
Gromit finds himself being pushed out of his room and home by a new lodger who is actually a ruthless criminal (and a small penguin). The penguin is planning a robbery and needs to use Wallace and his mechanical remote controlled trousers to pull off the raid. However, Gromit is wise to the penguin and comes to the rescue.

7 Wallace and Gromit: The Curse of the Were-Rabbit
16 Years. Has it really been that long since Nick Park's most beloved duo began their film careers with their first short movie A Grand Day Out? Ah the memories... Anyway, that's enough nostalgia...
7 Magic trousers
A B&W movie from I think the early fifties. A man gets a pair of trousers and every time he puts his hand in his pocket, he pulls out a pound note....