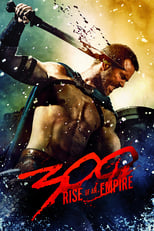 Release: Mar. 5th, 2014
Runtime: 1 hour, 42 minutes
Greek general Themistokles attempts to unite all of Greece by leading the charge that will change the course of the war. Themistokles faces the massive invading Persian forces led by mortal-turned-god, Xerxes and Artemesia, the vengeful commander of the Persian navy.

We didn't find any linked discussions for this film. Here are the results of a quick search of possibly related threads:
0 300: Rise of An Empire
"300" a Rousing, Blood-soaked Adventure...
0 300---Rise of an empire
Ashdoc's review--- The movie shows the Persian king Kashayarsha ( the Greeks called him Xerxes ) being instigated by his naval commander Artemisia to avenge the death of his father Darayavaush ( th...
16 How much will 300: Rise of an Empire earn?
As per the sources estimated movie budget is of $100,000,000 and its weekend collection is $45,050,000 (USA) so my question is how much it will earn?...

TheUsualSuspect 300: Rise of an Empire is a cash grab sequel, with less style than the original and more cartoon violence.
READ REVIEW

Masterman He certainly fitted the role and gave us one pretty crazy sex scene with Eva Green .
READ REVIEW

Iroquois Now it's almost a decade later and, because I'm the type of clever little so-and-so who would make sure that Room 237 would be the 237th film I watched this year, of course I would commemorate reaching 300 films with another extremely unnecessary years-too-late follow-up to a hit film based on a Fra....
READ REVIEW