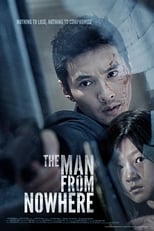 Release: Aug. 4th, 2010
Runtime: 1 hour, 59 minutes
His only friend called him 'the man from nowhere'... Taesik, a former special agent becomes a loner after losing his wife in a miserable accident and lives a bitter life running a pawnshop. He only has a few customers and a friend named Somi, a little girl next door. As Taesik spends more and more time with Somi, he gets attached to her. Then Somi is kidnapped by a gang, and as Taesik tries to save Somi by becoming deeply associated with the...

Thief The Man from Nowhere follows Cha Tae-sik (Won Bin), a young man living a quiet live while running a pawnshop out of his apartment.
READ REVIEW

Camo His brutality towards Jong-Saek when he found out what was happening to the children was amazing and so was the final wrist-slitting fight, the fight with Ramworan who was the only one that could actually fight him was a bit of a letdown though.
READ REVIEW

Takoma11 I watch this movie quite a lot, actually, but I always watch the last hour or so (for those who have seen it, I usually start watching at the nightclub scene).
READ REVIEW
View All (7)