The Body of My Enemy 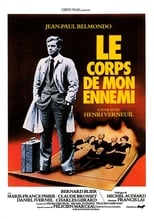 Release: Oct. 13th, 1976
Runtime: 2 hours
Francois always despised the textile barons who ruled his local town. But he fell in love with the family heiress Gilberte. Ten years ago, he would have married her. Now only hatred holds them together. Francois is accused of murder. A hooker and a football star lie slaughtered. He thinks he has been framed by the mob. Going underground, he finds that the trail leads all the way to the top - to Gilberte's family. He needs friends. And friends...