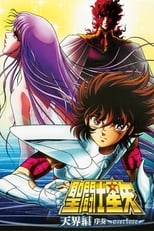 Release: Feb. 14th, 2004
Runtime: 1 hour, 23 minutes
After the bloody battle against Hades, the goddess Athena and her saints are still recovering when they find themselves face to face with their newest and most formidable foe: the dreadful moon goddess Artemis. Artemis replaces Athena as the earth guardian deity and takes over the Sanctuary, turning Athena's Saints into her servants. Upon invading the Sanctuary, the Bronze Saints learn that Athena was banished by Artemis and decide to fight the...

We didn't find any linked discussions for this film. Here are the results of a quick search of possibly related threads:
2 Knights of the Zodiac: Live-Action "Saint Seiya" Movie
A live-action adaptation of the classic Japanese anime series Saint Seiya recently wrapped production. The manga and anime followed warriors known as The Saints who gather their powers from the co...
0 The Saint reboot
"Paramount Pictures is in early negotiations with Chris Pratt to star in a movie reboot of “The Saint,” two decades after Val Kilmer’s thriller and 50 years after Roger Moore’s TV series. Pra...