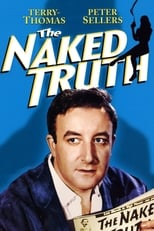 Release: Dec. 3rd, 1957
Runtime: 1 hour, 31 minutes
Nigel Dennis publishes a scandal magazine. But for each story he writes, he first approaches the person whose scandalous behavior is described (or rather implied, to avoid any libel suit) and says he will suppress the story in return for money. Several of his victims first decide individually to kill him instead of paying, but fail in amusing ways. Then they find that to protect their various secrets they must now join forces for a rather...