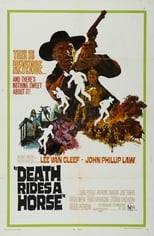 Release: Aug. 31st, 1967
Runtime: 1 hour, 54 minutes
Bill Meceita, a boy whose family was murdered in front of him by a gang, sets out 15 years later to exact revenge. On his journey, he finds himself continually sparring and occasionally cooperating with Ryan, a gunfighter on his own quest for vengeance, who knows more than he says about Bill's tragedy.

We didn't find any linked discussions for this film. Here are the results of a quick search of possibly related threads:
0 she goes and sees the train, he rides a horse in the train with flowers?
Hello! Please help me remember the movie. A young girl comes to the wilderness to teach in any school. There she was at first refused to obey. The class was an adult male, who does not get on with i...
2 An old movie my Dad talked about. (Horse, horse)
My Dad and his friend used to talk about a movie they once saw. I have an impression that it's an old movie (Perhaps black and white). They're both born in '61 so I guess the movie is from the late 60...
3 The Devil Rides out?
Years ago, I watched a film, I think it might have been in black & white, I thought it was the Devil Rides out, but that's in colour. In the end the hero drives a vintage car through a satanic cer...
4 In search of a old movie where a young warrior rides a giant snake
Guys, i am in search of an old movie and this is what i know about it. It's a drawn animation from probably the 80s. I think the movie is set in Africa, where a young boy is fighting against a 'la...
18 Young man gets a book with the death dates of people , he reads the date of his death
Hi! I really need some help cause i cannot remember fm this movie like an actor or a name, something. I remember there were 2 friends, boy&girl and the guy received a book where he discovered that...

Iroquois Fortunately, the film is backed up by some appropriately gritty camerawork (and the notorious red-tinted flashbacks that Tarantino "appropriated" for Kill Bill), to say nothing of Ennio Morricone's repetitive yet iconic score (again "appropriated" by Tarantino in Kill Bill).
READ REVIEW

Takoma11 The first is that Bill himself is kind of a dull character and Law's performance is extra wooden next to the much more memorable Van Cleef.
READ REVIEW