Two Down and One to Go 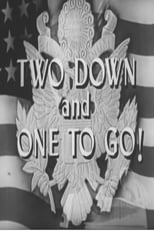 Release: May 10th, 1945
Runtime: 32 minutes
Documentary short film produced by the U.S. Army, intended to enlighten the American public on the final thrust of the Allied war effort in Europe and on the plans for the return home of American forces.