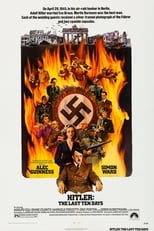 Release: Apr. 19th, 1973
Runtime: 1 hour, 46 minutes
Hitler: The Last Ten Days takes us into the depths of der Furher’s Berlin bunker during his final days. Based on the book by Gerhard Boldt, it provides a bleak look at the goings-on within, and without.

We didn't find any linked discussions for this film. Here are the results of a quick search of possibly related threads:
5 Hitler biopic?
Let's say a director of the caliber of Steven Spielberg made an Adolph Hitler biopic, how do you think the media, critics, and the masses would react to it? Would it be a box office hit, or a failure?...
1 The Man Who Killed Hitler and Then the Bigfoot
Two words: Sam Elliott...nuff said. Coming to select theaters, VOD, and Digital on Feb. 8, 2019. "Since WWII, Calvin Barr has lived with the secret that he was responsible for the assassinat...
20 I want feature movie about pact HITLER-ALIENS-USA inter alia gremlins
I want to someone do about this feature film. I want in this movie were gremlins (with the same image as a film 1984, 1990 and 2016), grey aliens, reptilians, nordic aliens, demons and others. ...
11 30 Days of Night: Dark Days
Originally Posted by Jrs' Sequel Buzz Thread 30 Days Of Night Sequel Shooting In October It was more than two years ago that it was first reported of ...