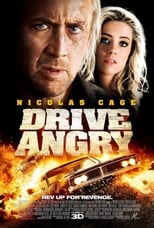 Release: Feb. 24th, 2011
Runtime: 1 hour, 45 minutes
Milton is a hardened felon who has broken out of Hell, intent on finding the vicious cult who brutally murdered his daughter and kidnapped her baby. He joins forces with a sexy, tough-as-nails waitress, who's also seeking redemption of her own. Caught in a deadly race against time, Milton has three days to avoid capture, avenge his daughter's death, and save her baby before she's mercilessly sacrificed by the cult.

We didn't find any linked discussions for this film. Here are the results of a quick search of possibly related threads:
3 Drive Angry 3D
Drive Angry 3D Exactly what Death Proof should have been. John Milton escapes hell to find his granddaughter who is captured by a cult and will be sacrificed on the full moon in order to bri...
3 Drive Angry (2011)
Drive Angry A vengeful father chases after the men who killed his daughter. Cast Nicolas Cage Amber Heard Katy Mixon William Fichtner ...
33 Two Angry Men: Yoda and BobbyB on "12 Angry Men"
Okay, this started as a discussion in the Shoutbox, but I figured I ought to move it here. Bobby hates 12 Angry Men, and I currently have it listed as my second-favorite movie of all-time. In other wo...

PeterVincent If you're trying to pick between this and Drive...well it depends on what you want, if you want a nice slow story with strong characters and classical music and stuff pick Drive, if you want some high octave, crazy a** action with ridiculous stunts however...go with Drive Angry.
READ REVIEW