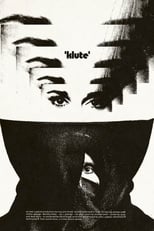 Release: Jun. 23rd, 1971
Runtime: 1 hour, 54 minutes
This acclaimed thriller stars Jane Fonda as Bree Daniel, a New York City call girl who becomes enmeshed in an investigation into the disappearance of a business executive. Detective John Klute is hired to follow Daniel, and eventually begins a romance with her, but it appears that he hasn't been the only person on her trail. When it becomes clear that Daniel is being targeted, it's up to her and Klute to figure out who is after her before it's too late.

Daniel M The film is comparable to Pakulas other work All The Presidents Men in some ways, both are about investigations and move along at a consistent methodical pace, but whilst one speeds up nicely to a great ending, the other seems to be repeating the same note until the very end.
READ REVIEW