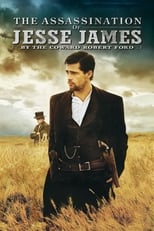 Release: Sep. 7th, 2007
Runtime: 2 hours, 40 minutes
Outlaw Jesse James is rumored to be the 'fastest gun in the West'. An eager recruit into James' notorious gang, Robert Ford eventually grows jealous of the famed outlaw and, when Robert and his brother sense an opportunity to kill James, their murderous action elevates their target to near mythical status.

We didn't find any linked discussions for this film. Here are the results of a quick search of possibly related threads:
22 The Assassination of Jesse James
Looks like another good western, that will be coming out. But I dont know about Brad Pitt though playing jesse james. Havent found much about this film yet, but I am still looking. A orignal story lin...
11 The Assassination of Jesse James
For what it's worth, I did like The Assassination of Jesse James by the Coward Robert Ford, which I just saw this week. I give it an A on historical accuracy. They got the dates and general events rig...
3 What's next for Jesse Eisenberg?
Hot off of the "The Social Network," I know he has the potential to be huge. Has anyone else seen his latest performance? It was absolutely stunning. He did not skip a beat the entire two ho...
0 Jesse Heiman
Jesse Heiman is funny actor from teen comedy movies. I can't to find original link, but it was good: And it's other interesting information: Do you know interesting movies with him? ...
46 I Don't Like Jesse Eisenberg
I always find him unlikeable in his movies, I find him to be very annoying and off putting ,he ruins good movies for me because of his presence. He comes off like a pretentious hipster douche the wa...

TheMaster The one complaint I have for this film may not even be a dig at the film itself, but what the American mentality was after Jesse James was killed.
READ REVIEW

mark f To me, that would be the reason to make another Jesse James film, but I don't feel the irony here.
READ REVIEW

JayDee Perhaps not the action-packed feature some may originally thought they'd get when they heard about Brad Pitt starring in a Western as Jesse James, but it turns out for the best.
READ REVIEW
View All (10)