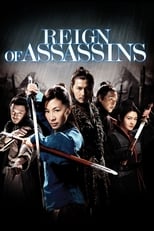 Release: Sep. 1st, 2010
Runtime: 1 hour, 57 minutes
Set in ancient China, Zeng Jing is a skilled assassin who finds herself in possession of a mystical Buddhist monk's remains. She begins a quest to return the remains to its rightful resting place, and thus places herself in mortal danger because a team of assassins is in a deadly pursuit to possess the remains which holds an ancient power-wielding secret.

We didn't find any linked discussions for this film. Here are the results of a quick search of possibly related threads:
11 Reign Over Me
Not sure how many of ye have seen this movie. Not going to give it a major review, i will leave that for the experts. The film centers around the rekindling of a delicate college-born friendship b...
92 Reign of Fire
Got some video game screenshots, and it's Official Site is up on the web. No, you won't find any dragon shots on either. What the hell? "Reign of Fire" Video Game Images...
16 Reign of Fire
Thats right people its finally here, the review of that blasted dragon movie, and yews, its the greatest movie of all time. London 2084, oh wait i mean 2020, im sorry we forgot to correct that for ...
3 Reign In Blood: Still Reigning
The Slayer DVD comes out tomorrow! I got to watch some of it when I was at my internship at umvd. I thought it was really cool. It's all of the orginal band members playing live, what's better than th...
0 Wu Assassins
Iko Uwais, Katheryn Winnick, Lewis Tan, Tommy Flanagan, Summer Glau & Tzi Ma A warrior chosen as the latest and last Wu Assassin must search for the powers of an ancient triad and restore balan...