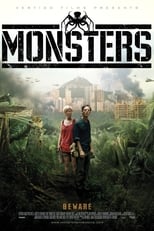 Release: Jun. 18th, 2010
Runtime: 1 hour, 34 minutes
Six years ago NASA discovered the possibility of alien life within our solar system. A probe was launched to collect samples, but crashed upon re-entry over Central America. Soon after, new life forms began to appear and half of Mexico was quarantined as an infected zone. Today, the American and Mexican military still struggle to contain "the creatures," while a journalist agrees to escort a shaken tourist through the infected zone in Mexico to...

9 Monsters
I saw a fantastic trailer for a movie coming out this fall, called MONSTERS. the trailer is on YouTube. Anyone else see it????? It's a really interesting concept. It starts where most monster movies e...

thracian dawg And despite the vast geographical area of the forbidden zone, a large indigenous population still lives there---being too poor to migrate or immigrate elsewhere; they have adopted a kind of down to earth, fatalistic philosophy that comes with living in a war zone.
READ REVIEW

MovieMad16 For most of the film, you dont see the monsters, but you feel their fear and intimdation when seeing the wreckage and hearing stories about them.
READ REVIEW