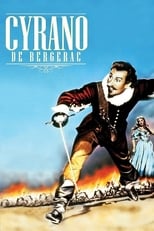 Release: Nov. 14th, 1950
Runtime: 1 hour, 52 minutes
José Ferrer won the Oscar for Best Actor for his portayal of the swordsman-poet using his silver tongue to woo the woman he loves for another man. Cyrano de Bergerac is a play written in 1897 by Edmond Rostand. Although there was a real Cyrano de Bergerac, the play is a fictionalization of his life that follows the broad outlines of it. The entire play is written in verse, in rhyming couplets of twelve syllables per line, very close to the...

mark f Cyrano is one of the great characters of literature, and Ferrer brings all his massive talent to the role of a man who feels contempt for almost all of humanity due to the fact that he feels his enormous nose has turned him into a grotesque who is unable to confess his deep love for his beautiful cousin Roxane (Mala Powers).
READ REVIEW