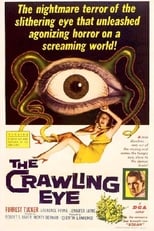 Release: Jul. 7th, 1958
Runtime: 1 hour, 24 minutes
An American investigator for the U.N., a German scientist and a British reporter join forces to investigate a series of disappearances and mutilation-deaths confined to a Swiss Alp and involving a thick, mobile cloud, a telepathic girl, an animate dead man, and tentacled, cyclopean beings from another planet.

We didn't find any linked discussions for this film. Here are the results of a quick search of possibly related threads:
3 Crawling forearm
Back in the 1980s, I've seen a movie on TV telling the story of a mad scientist (most probably Frankenstein) who revived corpses and also body parts. I remember being horrified by a scene showing a de...
4 Late '40s early '50s war movie - Troop crawling up beach
Just another of those movies from the past that bugs the crap out of me because I can't remember the name. I remember seeing this movie as a kid in the early-mid '50s. As I recall, the soldier was c...

KeyserCorleone But the shows first episode almost felt like the show had not reached its proper ground, because the first episode's featured movie, The Crawling Eye (known internationally as The Trollenberg Terror), is NOT one of the worst movies ever.
READ REVIEW