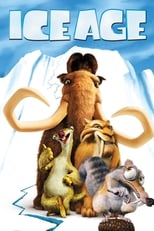 Release: Mar. 10th, 2002
Runtime: 1 hour, 21 minutes
With the impending ice age almost upon them, a mismatched trio of prehistoric critters – Manny the woolly mammoth, Diego the saber-toothed tiger and Sid the giant sloth – find an orphaned infant and decide to return it to its human parents. Along the way, the unlikely allies become friends but, when enemies attack, their quest takes on far nobler aims.

MovieMad16 3 Unlikely animals teaming up to get a baby back to its father , it feels like a 3 way buddy movie with animals and the directing and writing help the story be believeable...as well as the voice acting.
READ REVIEW