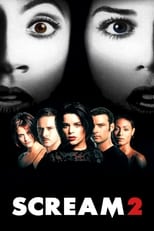 Release: Dec. 9th, 1997
Runtime: 2 hours
Two years after the terrifying events that occurred in Woodsboro, Sidney is now attending Windsor College in Cincinnati, and Gale Weathers' best selling book on Sidney's life has now been made into a major motion picture. When two college students are killed in a theatre while watching the new film 'Stab', Sidney knows deep down that history is repeating itself.

27 We've covered Se7en, now Scream (don't actually scream)
I was watching tv, and an old documentary came on about "I know what you did last summer" and one of the actors said, "If Scream hadn't come out, this movie wouldn'tve taken off." ...

Nostromo87 we end up with a thrilling ride of a movie inside a story inside a movie.
READ REVIEW

Gideon58 The thing I loved about the first film is that it let us in on the joke and was a seamless weave of a genuine slasher movie and a slasher movie satire, but that's gone here...Craven and his screenwriter have apparently decided that success requires respect and reverence and have decided to tell this....
READ REVIEW

MovieMad16 Seeing as Scream 4 has just crashed into cinemas, i felt it would be appropriate to sit through all the scream films once again to see if they stand out and if Scream 4 stands alongside them.
READ REVIEW