The Life Aquatic With Steve Zissou 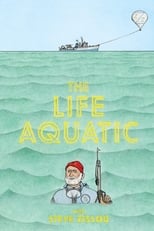 Release: Dec. 10th, 2004
Runtime: 1 hour, 59 minutes
Renowned oceanographer Steve Zissou has sworn vengeance upon the rare shark that devoured a member of his crew. In addition to his regular team, he is joined on his boat by Ned, a man who believes Zissou to be his father, and Jane, a journalist pregnant by a married man. They travel the sea, all too often running into pirates and, perhaps more traumatically, various figures from Zissou's past, including his estranged wife, Eleanor.

We didn't find any linked discussions for this film. Here are the results of a quick search of possibly related threads:
43 Has anyone seen The Life Aquatic Yet?
This has been in release in NY and LA for sometime now -- has anyone seen it yet?? I'd love to a review that's not from some lame, jaded movie critic....
3 The Life Aquatic Discussion
I don't know how many of you , if any have seen the trailer for The Life Aquatic with Steve Zissou, but it looks hilarious. Trailer and Synopsis here...
3 Life Aquatic Review
Summary: The Life Aquatic with Steve Zissou is an off the wall adventure film about the legendary Steve Zissou (Bill Murray) and his group of aquatic film makers. The beginning of the film sets the s...
1 zissou's frequently blistering and sometimes loving film reviews:
Show him the way to go home "Subterranean Blues" Directed by Joel and Ethan Coen I recently rewatched the Coen brothers’ 2013 film “Inside Llewyn Davis,” and realized that I like ...

Gideon58 Anderson has mounted a believable and emotionally charged canvas that, outside of fans of Jacques Cousteau, had to be completely foreign cinematic territory and centered it around a character who is brilliant and undisciplined, speaks without filter, and considers everyone in his orbit ends to a mea....
READ REVIEW

kkl10 The Life Aquatic with Steve Zissou shares the typical plot with other Wes' movies--the characters' path is equally liberating and reconciling--but on the aspects that juice up the cinematic experience, this movie seems the most uncompromising to me.
READ REVIEW