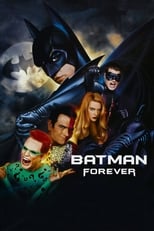 Release: Jun. 16th, 1995
Runtime: 2 hours, 1 minute
The Dark Knight of Gotham City confronts a dastardly duo: Two-Face and the Riddler. Formerly District Attorney Harvey Dent, Two-Face believes Batman caused the courtroom accident which left him disfigured on one side. And Edward Nygma, computer-genius and former employee of millionaire Bruce Wayne, is out to get the philanthropist; as The Riddler. Former circus acrobat Dick Grayson, his family killed by Two-Face, becomes Wayne's ward and...

49 Your honest opinion of Batman Forever
Honestly, I love this film! In my opinion it is probably the best out of the original 4 batman films. Val Kilmer was seriously underrated, and the villains were great. It was the second highest ...
0 Batman Forever
Silly movie,which could've been better with some thought....

KeyserCorleone Maybe it's fine for a typical cheesy 60's comic book, but the Burton Batman movies already had a feel about them that was dark and quirky, and the sci-fi elements were too quirky for the darker elements to really work.
READ REVIEW

thatfilmbloguk Batman Forever follows Bruce Wayne (now played by Val Kilmer) as he faces off with Edward Nigma/The Riddler (Jim Carrey), a former employee of Wayne's who wants to control the world using television, and Two-Face (Tommy Lee Jones), who wants to bring Gotham to its knees, and Batman along with it.
READ REVIEW