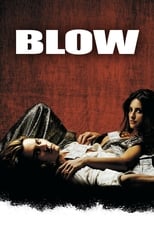 Release: Apr. 4th, 2001
Runtime: 2 hours, 4 minutes
A boy named George Jung grows up in a struggling family in the 1950's. His mother nags at her husband as he is trying to make a living for the family. It is finally revealed that George's father cannot make a living and the family goes bankrupt. George does not want the same thing to happen to him, and his friend Tuna, in the 1960's, suggests that he deal marijuana. He is a big hit in California in the 1960's, yet he goes to jail, where he finds...

19 Blow Up
Blow up (1966) - Michelangelo Antonioni I stepped into my first viewing of this film with a sort of a childish eagerness. After all, this is a film that, time and time again, has been referred to a...
8 What do you think of Blow Up (1966)?
It's a hard movie for me to judge cause I read the premise online which it said was about a photographer who thinks he may have photographed a murder, and that is what the DVD cover describes as well....
0 Blow Up 1967 (revisited)
Now here is a real cult movie directed and produced by Michangleo??????. The movie received two oscar nominations, but I found it rather slow and a bit boring. The story centers around a super rich ph...
142 Who is the last actor to blow you away with their performance?
It could be from a new film that you watched for the first time or a rewatching of one of your favorites , or maybe just a film you caught on tv and were taken with a specific performance. he...
20 Blow Your Mind - Movie Theories
Post here your theories about movies, that you think some, or many, people haven’t noticed. As an example, I was just sitting watching the Jurassic Park foursome, and I got onto JP3… … and I just...

Iroquois Johnny Depp may recycle a lot of his usual acting quirks in playing the drugged-up Jung, whose motivations at least manage to avoid being reprehensible; he becomes a drug lord out of the desire to be a wealthy provider as well as a responsible family man like his impoverished father (Ray Liotta) and....
READ REVIEW

Gideon58 Depp plays George Jung, a small time pot dealer in California who, after his second arrest for selling marijuana, finds out that the real money is in selling cocaine and through a connection he meets in jail, finds himself dealing with the Medillin Cartel and its leader, Pablo Escobar, to help Jung ....
READ REVIEW