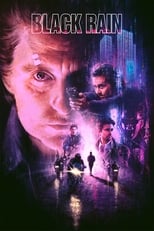 Release: Sep. 22nd, 1989
Runtime: 2 hours, 5 minutes
Two New York cops get involved in a gang war between members of the Yakuza, the Japanese Mafia. They arrest one of their killers and are ordered to escort him back to Japan. However, in Japan he manages to escape, and as they try to track him down, they get deeper and deeper into the Japanese Mafia scene and they have to learn that they can only win by playing the game—the Japanese way.

18 Black Rain (1989)
another 80s action thriller that i love and admire, in an era so focused on superhero cgi films, i wish we could be back to the 1980s to have these kinds of movies, like black rain, i love micheal d...

Gideon58 The film stars Michael Douglas as Detective Nick Conklin, another movie cop fresh off an internal affairs investigation who is at a bar one night with his partner, Charlie Vincent, played by Andy Garcia, where they witness a meeting between New York mobsters and members of the Yakuza (the Japanese Mafia), which results in two people being murdered in cold blood in front of dozens of witnesses.
READ REVIEW