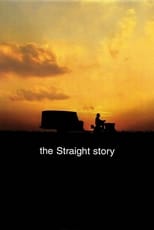 Release: Oct. 15th, 1999
Runtime: 1 hour, 52 minutes
A retired farmer and widower in his 70s, Alvin Straight learns one day that his distant brother Lyle has suffered a stroke and may not recover. Alvin is determined to make things right with Lyle while he still can, but his brother lives in Wisconsin, while Alvin is stuck in Iowa with no car and no driver's license. Then he hits on the idea of making the trip on his old lawnmower, thus beginning a picturesque and at times deeply spiritual odyssey.

We didn't find any linked discussions for this film. Here are the results of a quick search of possibly related threads:
12 Straight to DVD films
You could be forgiven for assuming that any film that comes straight to DVD is generally bad. If it was not shown at the cinema and did not get a major release there could be a very good reason for it...
9 Straight Outta Compton
147 min | Biography, Drama, Music Release Date: 14 August 2015 The group NWA emerges from the mean streets of Compton in Los Angeles, California, in the mid-1980s and revolutionizes Hip Hop ...
0 Straight Outta Compton
Every biopic of a rags-to-riches celebrity-type tends to have the same generic feel and the same generic message akin to Sam Rammy’s Spiderman. And that is, with great power comes great responsibility...
8 Best straight to video movie???
Ignored by theaters and scorned by movie-goers but still these films find a cult following. What do you think are some of the best straight-to-video movies??? My top three: 1. Wishful Thinking: Dr...
11 Southland tales - straight to DVD kinda
Unfortunatly this movie never came to milwaukee theatres - did anyone see this ?...

Takoma11 Farnsworth (who tragically died of suicide after filming this movie, a reaction to a terminal and painful cancer diagnosis), totally own the film as the spirited Alvin.
READ REVIEW

Iroquois Given how the film is an appropriately straightforward road movie where Alvin is frequently on his own or interacting with new people in virtually each scene, it helps that Farnsworth more than holds his own by playing a likeable gentleman who gets along with just about everyone he meets but who car....
READ REVIEW

Gideon58 Very impressive that an extremely theatrical director like David Lynch could provide such loving and simplistic direction to this quiet story that actually does provide a couple of detours we don't see coming, even though, for some reason, from the minute the film begins, we never doubt that Alvin i....
READ REVIEW